Nicola, from Team Happity, shares her story of PND recovery. In the hope that it will make any mum going through it feel less alone and believe that they will get better too.

If PND made any sense

If PND made any sense I would have had it after the birth of my first baby. A 39 hour labour, 12 weeks of colic and about two hours of sleep for months on end would surely impact my mental health – right? Apparently not!

And then I had my second baby…

My second birth was a totally different. I had the water birth I’d planned (and hoped) for my first. Labour was quick. After giving birth I felt euphoric, empowered and powerful. My new baby was an ‘easy baby’ right from the get go. I kind of hate that term but you know what I mean! She was content and easily settled. She slept well – meaning I got enough sleep to function even with a by-now- energetic toddler to look after too. It should have been an easy ride.

But PND makes no sense sometimes. And can sneak up on you when you don’t expect it.

It can happen to anyone. And it happened to me.

I started to feel anxious and disconnected. I found myself feeling lost and alone. I cried easily and a lot. Often I didn’t even know what I was crying about. I started to dread leaving the house and felt strange when I did.

The sticker on the kitchen clock

One of the strangest things I did (that looking back should have raised massive alarm bells if I was in any state of mind to realise) was that I told myself I could get through each day and cope but only until 5.45pm. That was the usual time my husband came home from work. I stuck a little flower sticker on the kitchen clock and would look at it so many times throughout the day, watching the minutes tick by. If, for any reason (a late meeting, a late bus, just life!) my husband hadn’t arrived home by the time the second hand hit that sticker I felt my anxiety rising and would begin to panic.

On the days when my husband came home, even just a few minutes past the sticker, I was a mess. I practically thrust both my baby and toddler at him and crumpled. Often in a sobbing mess on the bedroom floor.

I knew that something was wrong. But I couldn’t admit it.

Once I told someone that I was struggling they’d think I was a rubbish mum or was failing. Wouldn’t they?

I was also ashamed. Surely it was easier just to try and cope than admit I had a mental health problem?

But I knew I couldn’t carry on, day after day, feeling and acting the way I was. I did my utmost to hide it from the outside world but even that was getting harder to do.

At my next appointment with my health visitor (I can’t remember what it was for but it was for my baby really – not me) I burst into tears and opened up about what had been going on.

I was really lucky. My health visitor referred me to Bluebell and I only had to wait until the following week to start counselling.

In my first counselling session I mostly just wept.

After holding my feelings in for so long it was like the dam burst and I couldn’t stop crying. But, as the weeks went on, I started to open up and to talk. I can’t explain how good it was to have that space to talk (and cry) freely and honestly, without the fear of upsetting or burdening anyone.

My counsellor helped me really understand my feelings and challenge any thoughts that this was somehow my fault and that I would never get better. The other way it helped was that whenever I struggled on a particular day I could kind of ‘shelve’ my panic, knowing that I only had to wait a few days before I was able to talk and get support to help me through.

The long journey back

Starting talking therapy for PND was not magic or a quick fix. It took a lot of time and a lot of strength. Recovery was definitely not linear. Whenever I felt myself going backwards and starting to struggle again I would panic and think that I’d never get better. But I had to learn to believe that each time I took a step back I knew I had made progress before and so getting back up and fighting again was a little bit easier.

Tambourines for my baby: tea and company for me

As I began to make progress I joined a baby music group. And that was another important step for my recovery. Which sounds a bit odd. In essence it was a group, where we sang songs together and our babies played little percussion instruments and joined in actions and dances. So far, so lovely. But it was like an oasis for me in my week.

For a start it was a reason to make myself get out of the house each week- however much I wanted to hide. The other mums there were lovely. It took a bit of time but, over the weeks we began to get to know each other better. And shared (warts and all) stories of our births! It’s funny how strong that need was to share those stories. We went from finding out each other’s names to swapping tales of episiotomies and epidurals almost in one breath!

And we soon became able to share the more honest bits about parenting too. Including all the tough bits. And, for the first time since I had my baby, I felt like I was not alone. And that really helped a lot.

Back to being me

Slowly, slowly I began to feel better. And more like me. And when I started to slip and feel wobbly then I found I had the skills to reframe my thoughts and work through them. A year after starting counselling I proudly announced that I was all fixed and ready to leave.

My very lovely and very wise counsellor recognised the fact that I was trying to put a neat timeline on my PND. As if it was something that I could file neatly in a box and tick off. She encouraged me to keep going and only stop talking therapy when I was really ready. That turned out to be a few months later.

Looking after my mental health

Today I am much more aware of my mental health and try to look after it in the same way as I look after my physical health. Probably more, in truth. If I ever notice myself starting to struggle – for me that’s when I start hiding and avoiding people and start to get snappy and tearful over little things – I seek help. Sometimes that’s just talking to a friend. Or making more of an effort to find time for me. It has included having more counselling in tougher times. And I’m no longer ashamed to admit it.

Oh, and those lovely women I met at baby music? They’re still friends to this day. Even though those tiny babies that used to shake their tambourines are now 20 and striding out into the big wide world. We’re meeting next week for one of our infamous ‘pot luck suppers’.

We used to talk about important issues like how to keep a toddler in bed so you can get just five more minutes sleep and why does Miss Rabbit in Peppa Pig have so many jobs. Now we swap tales of how to get your teenagers up so they don’t fritter away their days and how we feel about the latest drama between Liv and Dom in Married At First Sight Australia! You know, the important stuff!

Turns out that after finding help that helps what makes a massive difference is also finding friends who you can talk about that stuff with as you go through this mum malarkey really is one of the most important things after all.

Getting help for PND

If you are struggling with PND then head over to our PND page to find loads of ways to get help and support.

How to tell if it’s PND or the baby blues

The impact of the pandemic on new parents

PND, PTSD and Post-Natal Anxiety – This Is Family

Lisa shares with us her experiences with a traumatic birth and dealing with PND, PTSD and Postnatal Anxiety. She has discussed sensitive subjects in this submission, all in the hope that it will help anyone who is currently going through a similar situation. If you yourself are currently dealing with PND, PTSD and/or Postnatal Anxiety, please do not suffer alone. Seek help if you can. 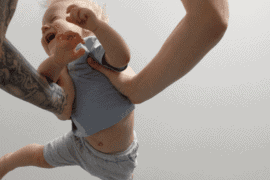 Dads Are Not Babysitters, And Other Dad Blunders

I keep hearing a phrase pop up time and time again from male friends, colleagues and just in general – I’m on babysitting duties tonight, so I can’t do X or Y. Dads are not babysitters! Are they?…

Breastfeeding Tips For New Mums – This Is Family

Breastfeeding can have highs and lows. But, Anita (who has also previously submitted a This Is Family story here) has been kind enough to share with us and our audience some of her best breastfeeding tips for new mums. 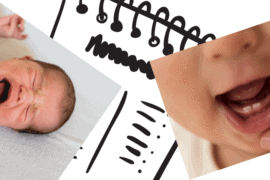 Chapter three of the Diary of a First Time Dad as our head of growth Stuart recalls the drama of the appearance of his baby’s first teeth! He thought he knew what was coming. Oh – how wrong…

“They admitted me to hospital and after five days of consistent bleeding, I went in for an emergency C-section for a premature birth
They told me during the surgery that I had suffered a placental abruption.”

Meraymi Ibrahim shares with us her experiences of giving birth to her son, Matteo, prematurely.

Sleep? I Hardly Know Her – This Is Family

“It’s 3am. You’ve been cluster feeding for what feels like an eternity. But, somehow, this tiny limpet with a stomach the size of a cherry is hungry AGAIN!”

Anita Casu shares with us her experience raising a baby who simply wouldn’t sleep at night.

When Breastfeeding Is Hard – This Is Family

“In the beginning breastfeeding went smoothly. But by 10 weeks he was screaming and arching his back and refusing the breast at most feeds.”

Sally Rickard shares with us her experience of both receiving help from a breastfeeding consultant, and then being inspired to take it on herself! 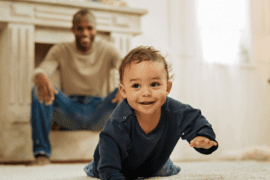 Diary Of A First Time Dad: Milestones Or Millstones?

Can an exciting milestone of a baby’s first attempt at crawling turn out to leave our first-time dad Stu with a foreboding sense of dread? We hope you enjoy the latest blog from our Head of Growth, Stuart!… 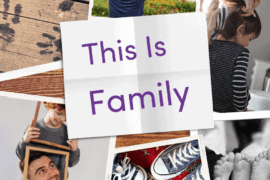 This Is Family: Happity Wants To Hear Your Story!

As you might already be aware, our mission at Happity is, and always has been, to help end loneliness for parents by connecting them together through baby and toddler classes. But we want to further support our community by helping them to feel seen, and to make their voices heard.

Do you have a story that you want to share?